After 30 years, Internal Communications and HR professionals could benefit from a fresh approach to activating employees to drive business success, argues Chris Teague.

It’s the first article in our new Activate! series that will share new thinking on transforming business through the power of people.

We live in an age of rapid, unprecedented change in business. So why do we still allow a concept that is 30 years old to determine how to get the best out of our people? 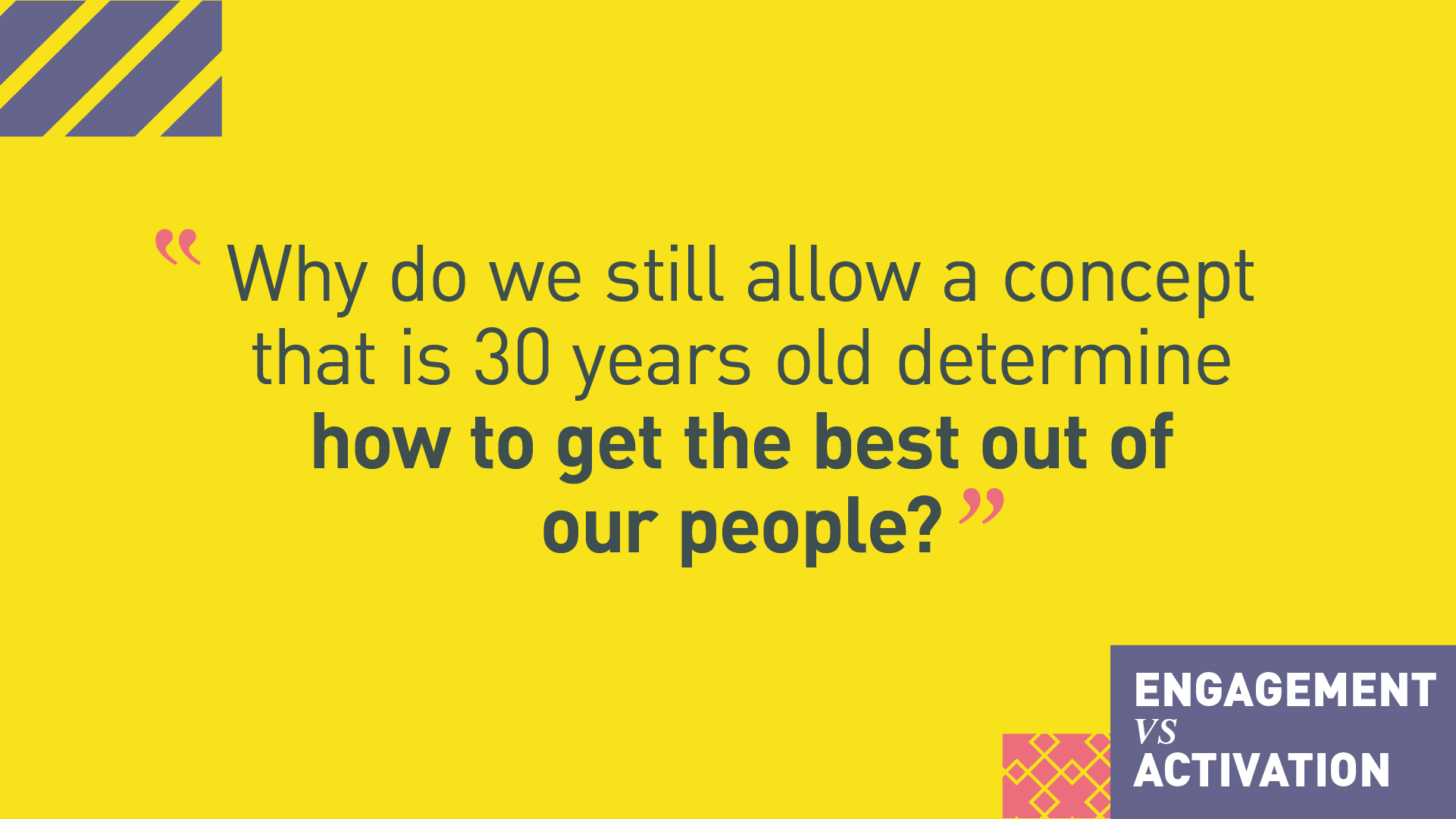 Employee engagement may feel like a contemporary concept, but it’s been around longer than you might think. Professor William Kahn of Boston University first used the term in a 1990 paper in which he described employee engagement as “… the harnessing of organisation members' selves to their work roles”.

He stated that, once ‘engaged’ people “… employ and express themselves physically, cognitively, and emotionally during role performances.”

This 'involvement of the self' was a giant leap from the principle of job satisfaction that had been in circulation since the mid 70s. Despite predating the internet, Kahn's idea has proven to be a durable concept. Indeed, in many circles it's still seen as the holy grail of boosting employee performance, staff retention and job satisfaction.

But 30 years on, the world – and the workplace – are very different. I believe that 'employee engagement' as a panacea for optimising the performance of people has reached its sell-by date. It's dead.

That’s a provocative statement and deliberately so. I want to make internal communications and HR professionals stop and think about how old-school ideas might be holding them back. And how they might achieve more.

So what gives me the right to declare employee engagement dead?

Let’s start with the statistics.

Recent research trumpeted that employee engagement is at a 19-year high at 34%[3]. But this means that - even in these 'good times' - a staggering two-thirds of people are disengaged from their work. In fact, 13% of them are 'actively disengaged'[3] (defined as ‘undermining the performance of others by constantly voicing their dissatisfaction’). 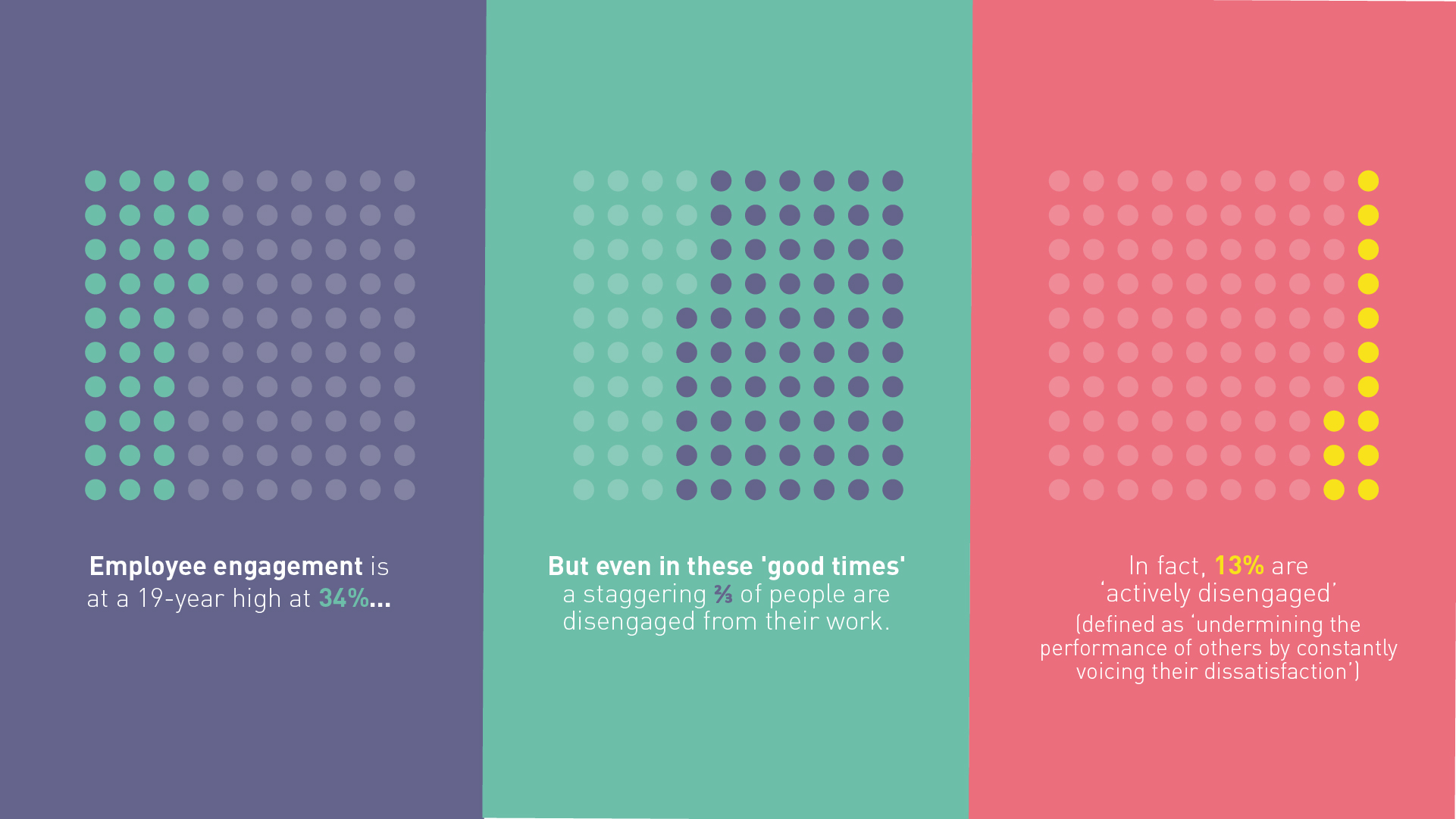 On the theme of disengagement, consultancy Korn Ferry asked 5,000 people why they were looking for a new job; 33% said they were bored; 24% said that the culture didn't fit their values[4].

The clues are there: ‘employee engagement’ is failing employers and employees alike.

The battle for talent

Why does this matter? Let’s consider one of the biggest challenges facing business today – the battle for talent. 81% of executives say that talent management will be a key lever for competitive advantage in the next 3 years[5].

Talent as a driver of competitive advantage has always been about recruiting and retaining the brightest and best. But more than ever the issue is: once you have them on-board, how do you get the very best out of the brightest?

A key factor is the rapidly changing profile of the workforce. It’s forecast that by 2020 Millennials (aged 25 to 39) will make up 35% of global workforce – with Gen-Zs (aged up to 24) now joining them in the workplace to make up a further 24%.

This has led to a change in the motivational narrative. No longer driven by performance factors such as reward, progression, recognition or achievement, these growing pools of talent want to understand their purpose; find meaning in what they do. They also see a genuine connection to their role as a driver of their loyalty.

Employee loyalty is a key issue. We know that millennials change jobs more often than any other age group (60% of them are 'open to a different opportunity'[7]). Low engagement is the main cause of this high turnover, as 84% say that they are not emotionally or behaviourally connected to their jobs or their companies[8].

In line with this, millennials who intend to stay with their organisations for the longer term are far more likely than others to experience a strong sense of purpose, inclusiveness and free-flowing communication[9].

But none of these 'sticky' factors can come from old-school 'engagement' tropes. While communication still has a role to play in the journey towards making people feel more connected, committed and creative, it's no longer the key to unlocking people's true potential to drive business change. That requires Activation.

A great example of Activation in action is our ongoing relationship with a major global bank. With staff attrition at its highest, they asked us to help them address a challenge faced by many businesses: they were recruiting and training staff who were then leaving.

The bank reconsidered its strategy, working with us to activate a new vision, a new business purpose and new values. Three years into working with them, not only was attrition at an all-time low, the organisation was named the best place to work in the UK (an award it's won twice since).

I’ve spent many years travelling the world sitting in corporate presentations that pay lip-service to 'engagement'. Gatherings focused on what the people on stage thought was important, what their agenda was and what they wanted people to do. Mostly it was done for 'appearance'. Frequently it was patronising. Almost always employees were left to wonder what was in it for them.

And it always looked the same: slide after slide telling them 'You need to do this'. I believe that effective communication is a two-way conversation, but this didactic approach felt like a top-down imposition: a set of instructions broadcast to the many. Often without any discussion or exploration to help people understand why their part in it mattered.

In the 21st century, people no longer want to feel 'engaged' with someone else's idea of what their role should be. Increasingly they're seeking meaning in their work - an understanding of how what they do aligns with their own deeply personal attitudes and motivations.

So how do we change this?

A lot of so-called 'engagement' merely keeps people informed of things that are already happening. This top-down approach - detached from employees' everyday experience - makes it too easy for people to SAY they understand it, but then DO nothing. 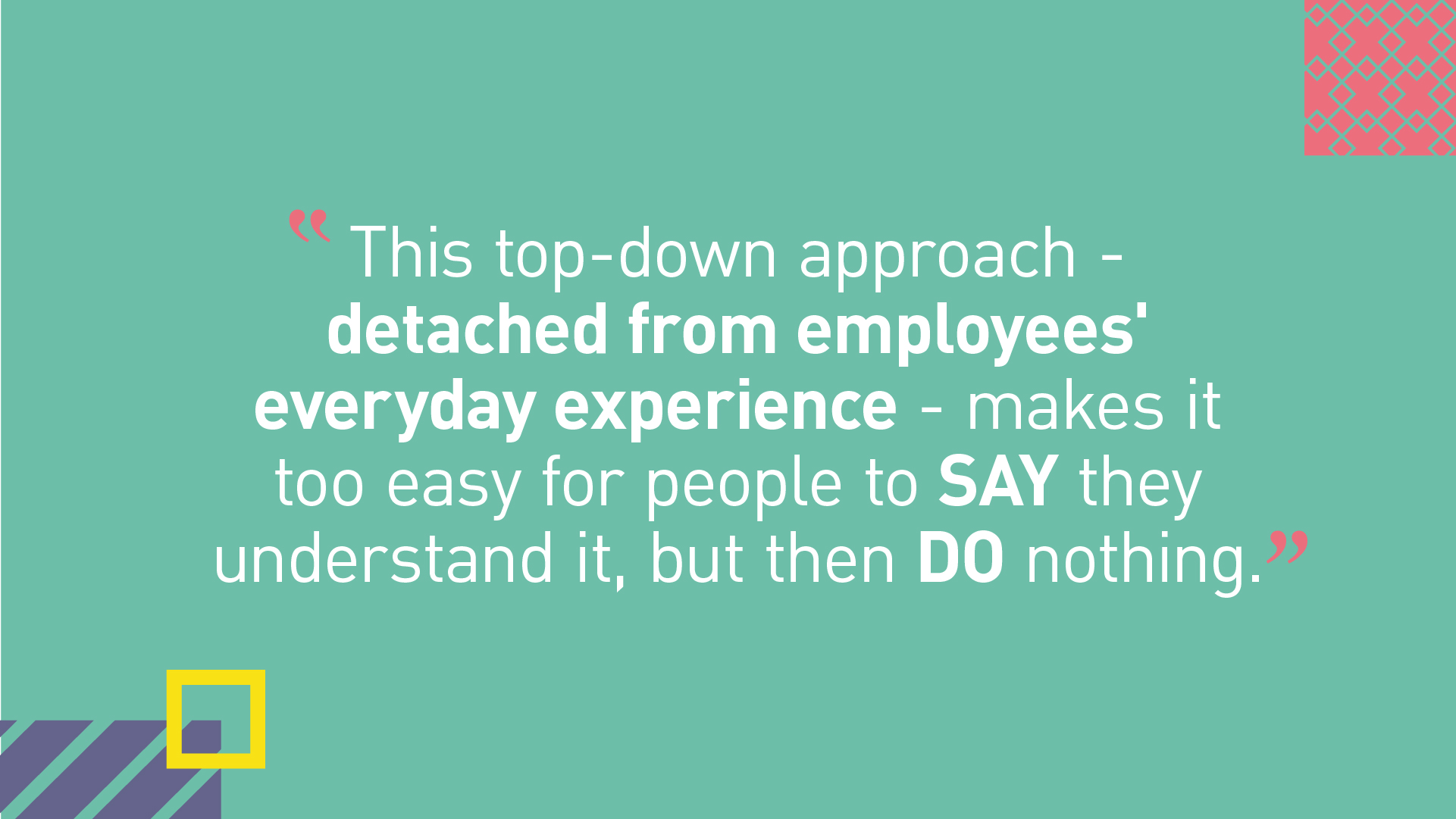 Engagement is a cerebral concept: it happens inside employees' heads, so you have to take it on trust that it's happened. This is reflected in conversations we have with internal communications and HR professionals who are doing everything they can, but are still struggling to deliver behavioural change.

They often tell us that their great engagement scores aren't being reflected in performance or productivity gains: highly engaged workforces who are receiving messages loud and clear, but are not DOING anything. They're looking to others or to their leadership for direction. It’s passive behaviour.

We believe that for transformative impact, people need to DO something better or different with the information they're given. They need to be switched on from their passive state: they need to be activated.

Rather than communicating at distance, Activation is grounded in live, immersive, hands-on events that excite, involve and inspire action in employees. And the results can be transformative.

Conclusion: Switch them on

So that’s article number one in our new Activate! series. It gives you an introduction to our philosophy and an insight into how we help businesses activate employees to deliver their strategy and change their culture.

Ultimately, if people truly are your business’ greatest asset, we think you’ll find that they work a lot better when you switch them on. And that takes more than just engagement. It needs a catalyst that ignites and inspires people on a higher emotional level.

Thanks for reading and watch this space for the next article in the series.