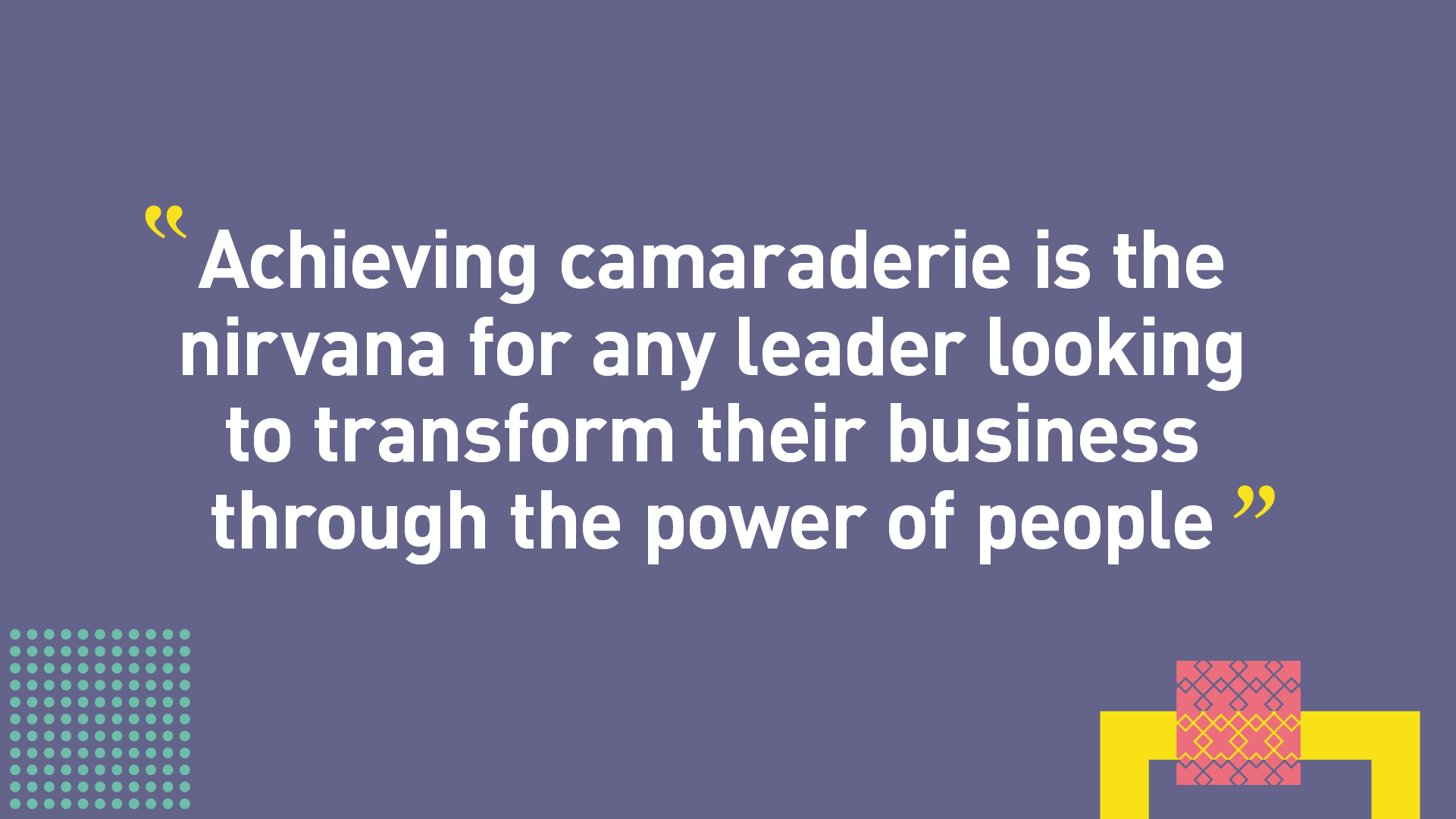 Welcome to the fourth in our series of Activate! articles. This time we are looking at camaraderie.

We spoke to expert team-builder Chris Brindley about his experience in galvanising individuals into close-knit high-performing teams. Chris was previously Sales Director at British Gas and MD of Natwest. As MD at Metro Bank, he launched the first serious ‘challenger’ banking brand in a generation, with his ‘people model’ at the heart of its successful disruption strategy. He’s now an Elite Sports Business Mentor with the Premier League's Elite Academy Manager Programme, board director of Super League and Chair of the 2021 Rugby League World Cup.

Specifically, we spoke about how achieving camaraderie is the nirvana for any leader looking to transform their business through the power of people. 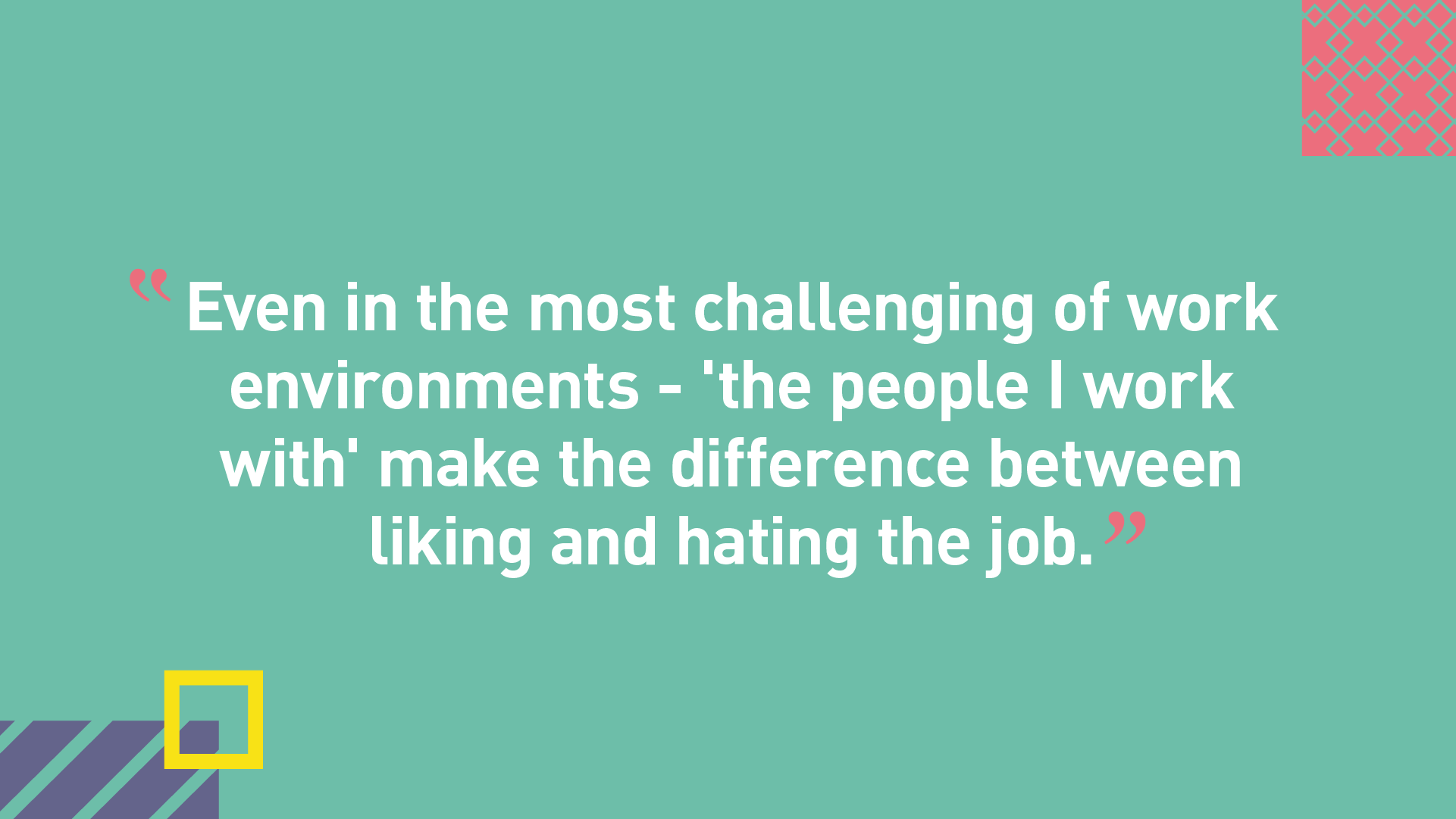 We spend an awful lot of time with our colleagues. Half of our waking hours in every working day. More than a third of our waking hours over our work life. We invest so much of our time – and ourselves - in what we do between 9am and 5.30pm that it has to MEAN something, surely?

We've previously touched on the fact that work must have a purpose that goes beyond just paying the bills and 'getting to Friday'.

Indeed, a common refrain we often hear is that - even in the most challenging of work environments - 'the people I work with' make the difference between liking and hating the job. It is the emotional energy locked within those human connections that we believe can be released as a powerful transformative force: camaraderie.

The general perception is that camaraderie is just about friendship, but it runs much deeper than just liking the people you work with. It’s much more about bonds created through mutual trust. To understand why it is such a potent accelerant of business culture, we needed to look at the underlying human behaviour.

1. The need to belong 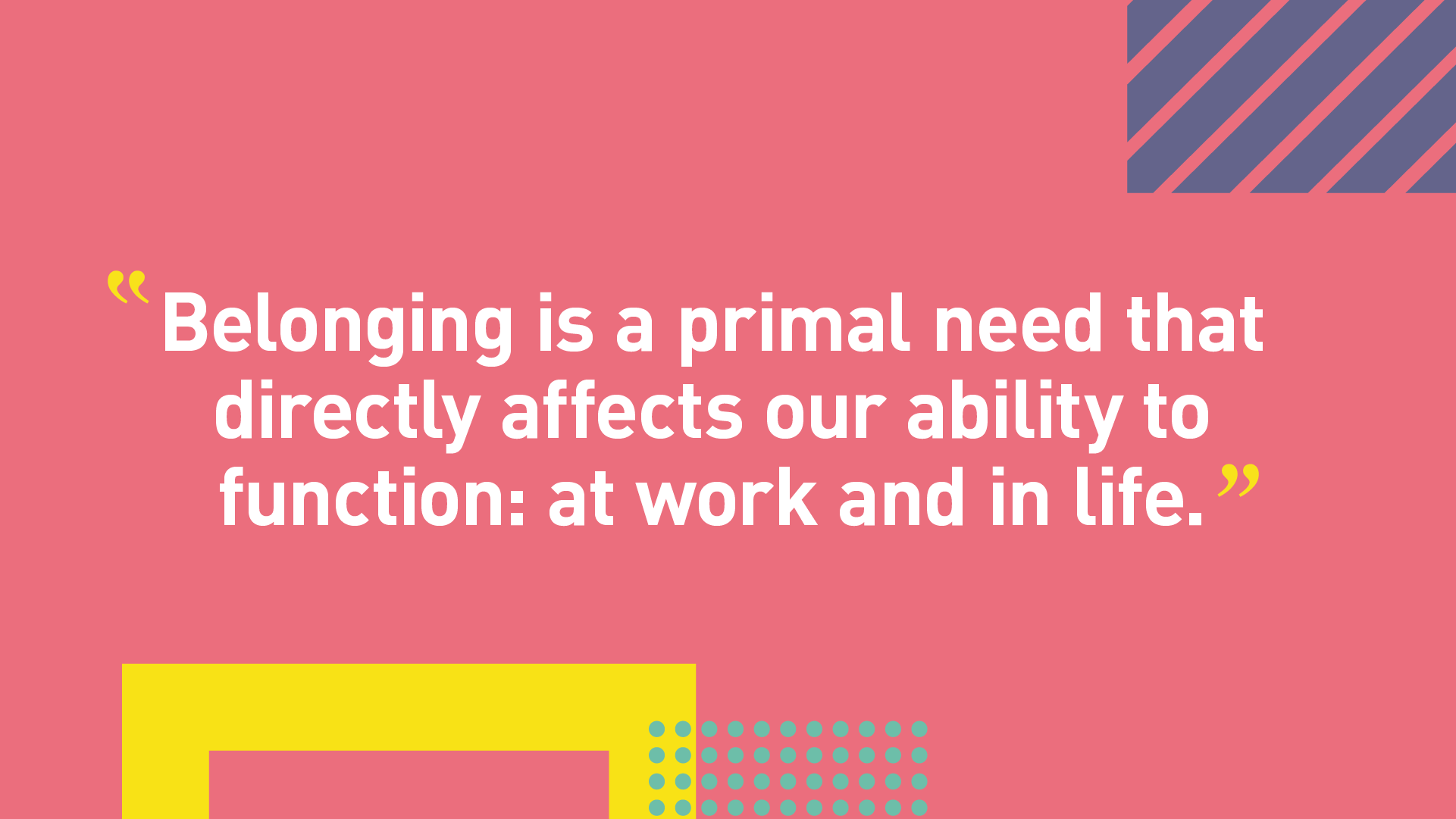 People are hard-wired to make connections with others. Father of attachment theory, Psychologist John Bowlby described an innate desire for "psychological connectedness between human beings".

Belonging is a primal need that directly affects our ability to function: at work and in life.

Conversely, failing to connect with those around us actually threatens our wellbeing and makes us function less effectively (1)

So, if organisational cultures reflect the behaviours of their leaders, we believe that they must lead the conversation on creating deeper, more meaningful, more emotional connections between their employees.

"There has to be a level of rapport in every team that's rooted in a common cause. People believe because those around them believe."

However, while biology, neuroscience and psychology all tell us that we work better when we're connected to other people, modern life seems to have other ideas. 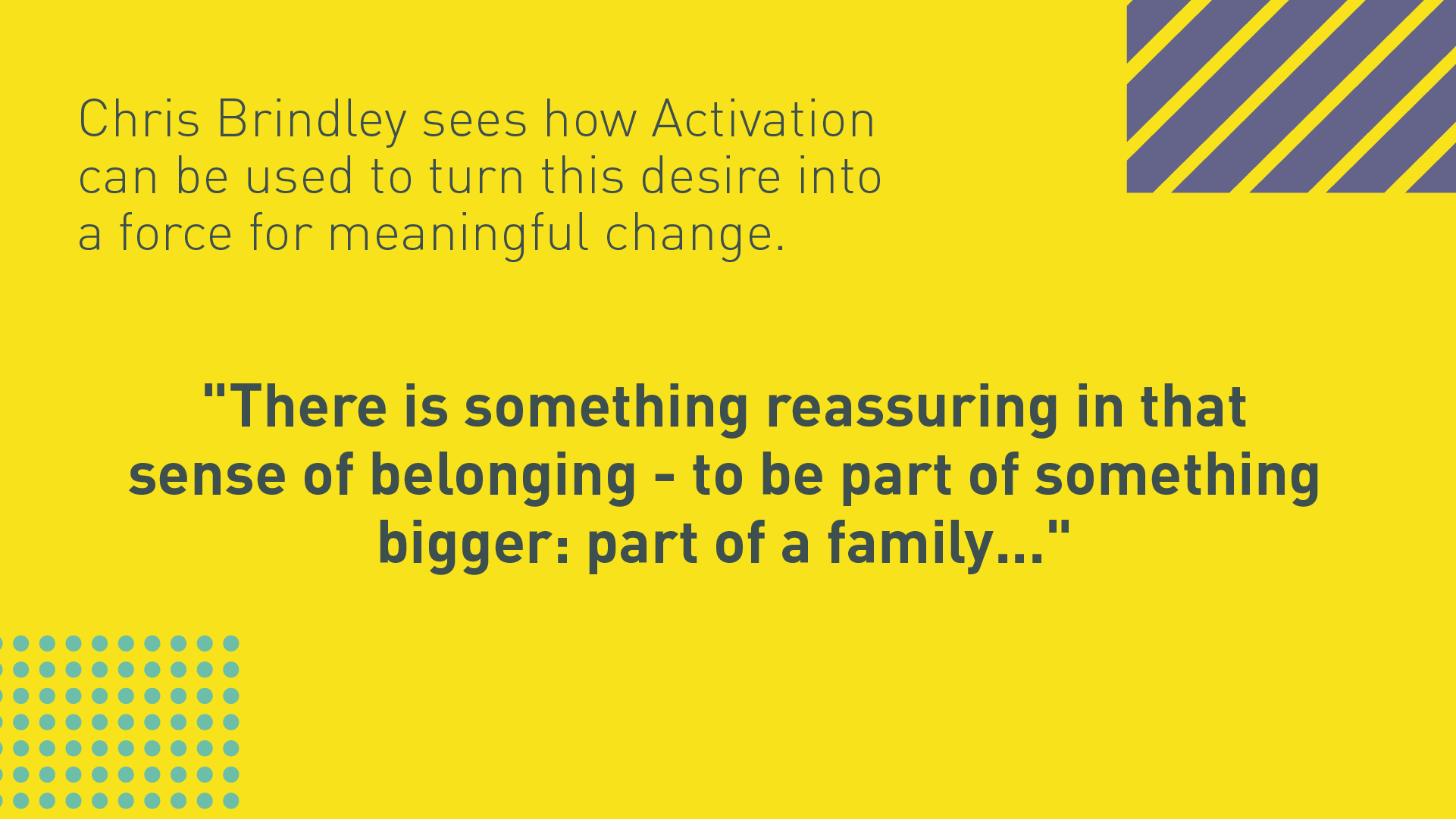 Whilst human beings crave connection, the socio-economic trends of modern life run counter to our most basic programming, with more people living alone today than at any other time in history. (2)

The combined forces of cultural change, the destigmatisation of single life, people delaying marriage and parenthood, a 42% divorce rate and people living/working longer have caused a sharp rise in solo households in the UK. The number of people living alone increased 16% in the last twenty years to 7.7 million. In the next twenty, that figure is forecast to grow to almost 11 million. That's one in seven people living alone by 2039. (3)

Such isolation is bad for our state of mind. Of those solo households occupied by latter-day millennials (25-34 years old) more than 90% of them are single - and single adults living alone are less satisfied, less happy and more anxious than those living with a partner. (4)

As millennials become the majority of the workforce, joined by an influx of Gen Zs, research shows an increase in detachment and isolation - particularly at the younger end of that spectrum.(5) Interestingly, as people's personal lives become more siloed, they are looking to their workplaces as havens of community, belonging and connectedness - with over a third of people looking to their workplace for their greatest sense of belonging. (10)

Indeed, a recent PGI survey revealed that 70% of millennials want the people they work with to function as a second 'family'. (9)

Chris Brindley sees how Activation can be used to turn this desire into a force for meaningful change. "There is something reassuring in that sense of belonging - to be part of something bigger: part of a family..."

He goes on: "There is real power in knowing that you have people around you that you can trust. And knowing that in difficult times, that you can rely on them. I'm excited by the idea of camaraderie being the manifestation of mutual trust" 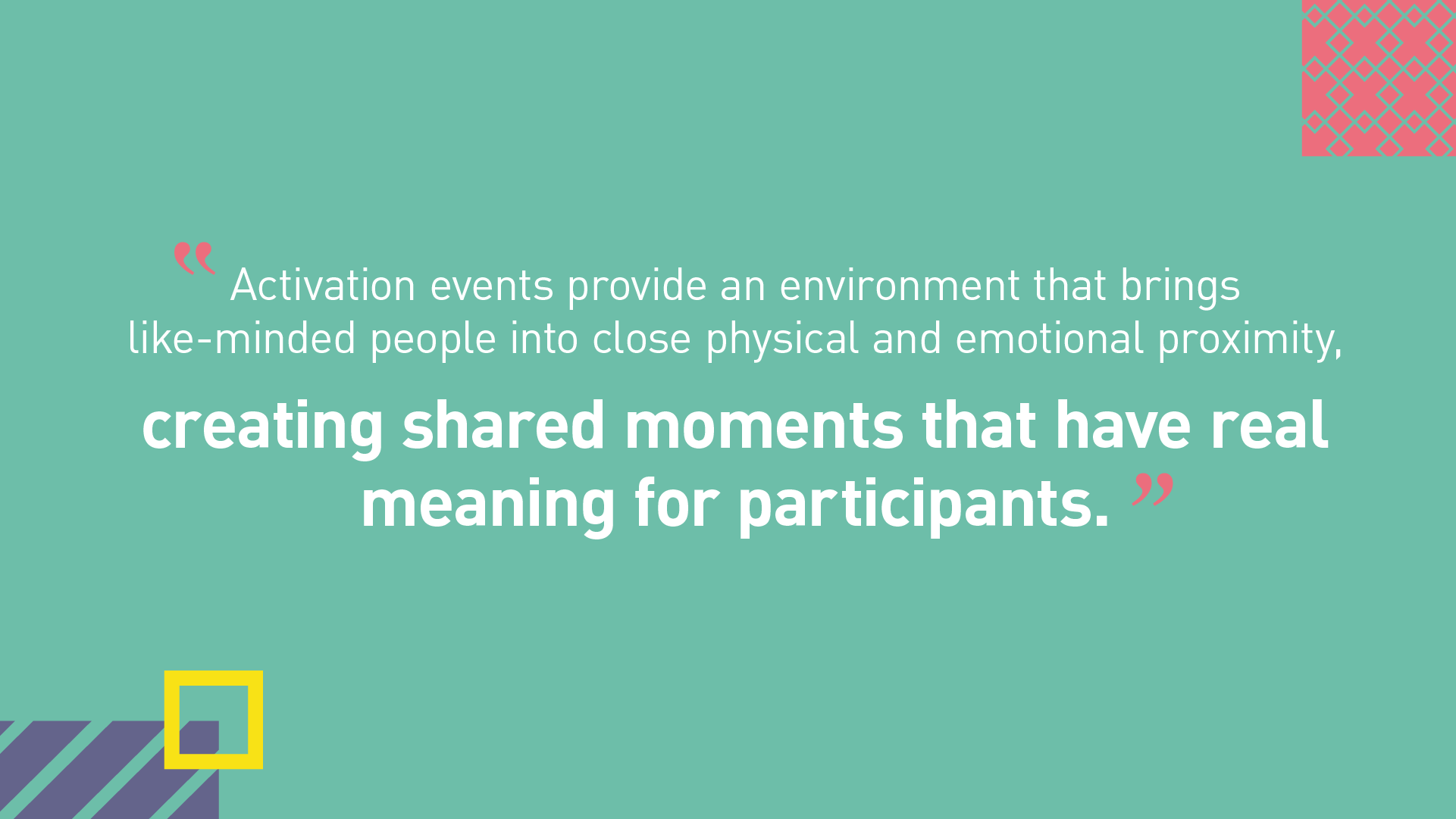 Trust is the glue that binds relationships. The intractable belief in the truth, reliability, and ability of others to do the right things for the right reasons.

Neuroscience tells us that human beings don't connect solely for gain. There is no ulterior motive in the core desire to connect: the connection alone IS the motive. As such, our 'social radar' runs in the background 24/7 (7) - and this is what People Activation taps into.

This switching-on of our 'social brain' is the secret that unlocks the power of camaraderie. Shared experiences drive the feelings of connection by playing to our most basic programming, where sharing the same feelings, beliefs and values as the people around us becomes a catalyst for empathy and 'social harmony'. (7) Indeed, understanding our roles and responsibilities within a group strengthens both the group AND our individual sense of belonging. (8)

So, if People Activation creates emotional bonds and builds trust, just how big is the potential effect that camaraderie can have on a business?

"Massive," says Chris Brindley. "Imagine if more people stayed with your organisation because the camaraderie was such that - even though they knew that the job was hard - they still loved it? If you could halve staff turnover, that'd bring significant cost savings."

"Ask yourself: What's the cost of recruitment to an HR director? The real cost of hiring and inducting and training. And what would be the impact of reducing the cost of short-term/recurring absence." 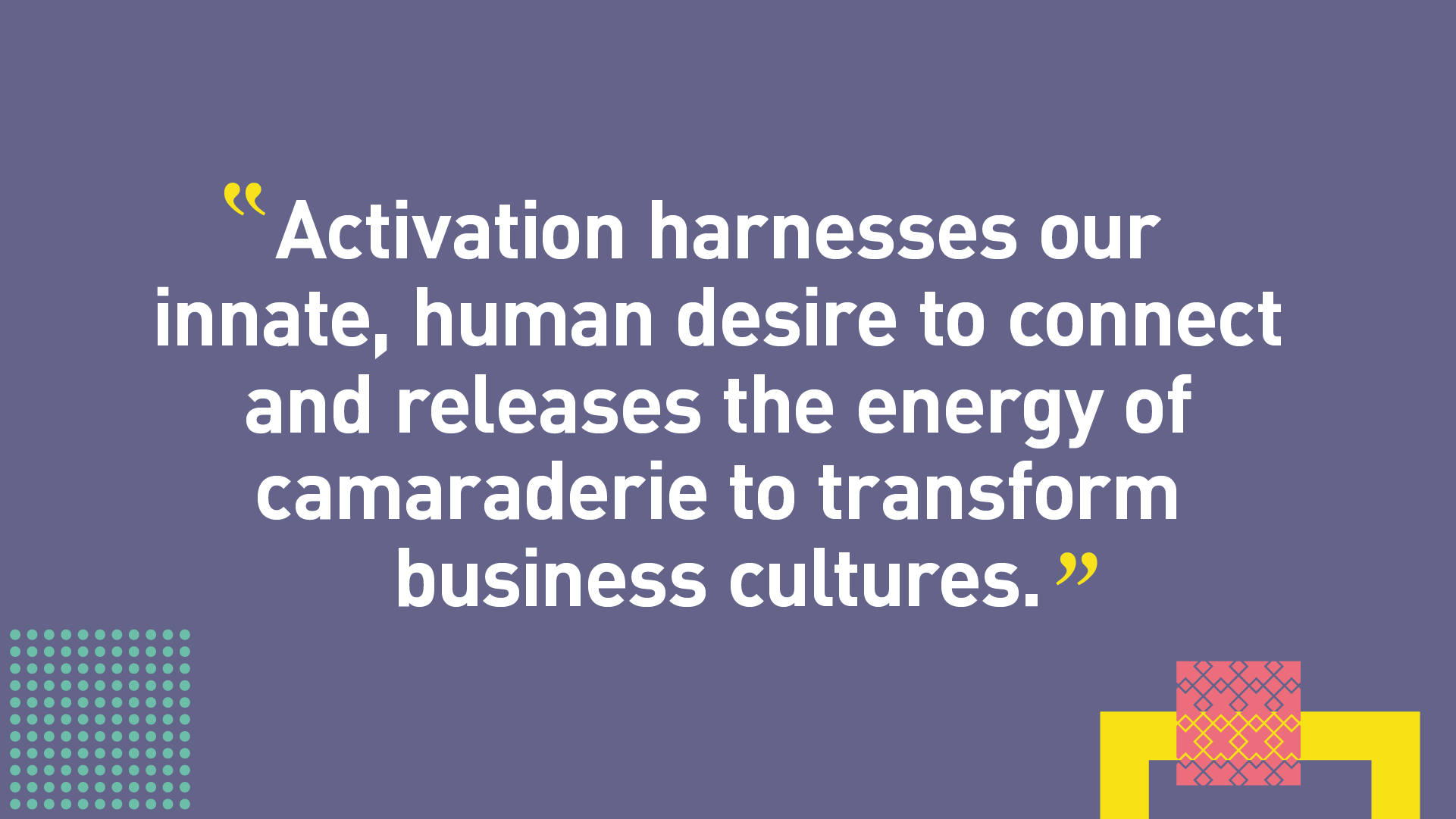 People want to feel not only like they belong to something, but that the something belongs to them.

With its ability to engage, inspire and motivate individual and collective change, Activation understands that people want to be part of a something bigger than themselves. And they want to feel part of the strategic conversation rather than an afterthought.

Activation harnesses our innate, human desire to connect and releases the energy of camaraderie to transform business cultures.

But too often the conversation is one-way: business leaders broadcasting platitudes, with little thought for how their messages are received. Chris Brindley breaks it down: "Conversations start with ritual and cliché. They then move to facts and information and on to beliefs and attitudes. Via 'emotions and feelings' they peak with camaraderie."

"But most group conversations comprise rituals and clichés: they struggle to move beyond facts and information."

We believe that this shortfall in emotional connection is exacerbated when comms professionals are reduced to conduits for pushing out information as opposed to really activating people as a key part of a change programme. That's where People Activation comes into its own.

Rather than create an environment that forges mea3ningful human connections, too many businesses opt for ‘team building’ exercises which are short lived. They don’t tap into the day-to-day emotional needs of the participants and don’t really improve performance in the world beyond that moment.

In our experience, people want to do challenging work alongside other talented people. And it's the connections we have with our colleagues that we look to in adversity. That's why, when we look back on a demanding project, it’s not the work we remember, but the camaraderie that pulled us through.

Ultimately, shared experiences good and bad build camaraderie - and live Activations provide the platform to not only share these stories, but also to draw strength from them.

We'll leave the last word to Chris: "The reason a lot of engagement initiatives fail is that their leaders don't really lay the groundwork for change. Humphrey Walters identified three critical factors in building winning team cultures. What's our cause? What's our identity (and how do we create pride in the badge)? And how do we behave as a team? It all comes back to what you expect of each other.”

In the spirit of camaraderie, we agree wholeheartedly.

(5) The Economist: "Loneliness is pervasive and rising, particularly among the young" - Unattributed, August 2018